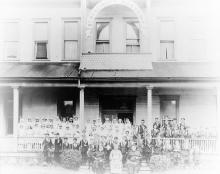 St. Hyacinth Academy, founded in 1864, served the community until St. Matthew School was built in 1927. In 1960 the grade school moved to Jesus the Good Shepherd School. The location of St. Matthew's was unsuitable for any growth and modernization, making the prospect of a new Catholic high school appealing to the students of St. Matthew's and area Catholics.

In 1960, Laura Bres Breard Rinehart donated a ten-acre tract of land on Louisville Avenue to the Diocese of Alexandria for the purpose of establishing a new Catholic high school to be named for her son, Rae Frederick Rinehart. Jr. Frederick was the only child of Rae Frederick, Sr., and Laura Bres Breard Rinehart. He attended St. Matthew's School and graduated from Neville High School in 1934. He contracted typhoid fever while attending Ouachita Junior College and died on his seventeenth birthday, March 29, 1935.

The Diocese sold the ten-acre site and the proceeds were used to purchase the present site on which the school was erected in 1964. Laura Bres Breard Rinehart's only request was that the new high school be named in memory of her son. Later, in her will, she left the provisions for a convent, Laurel Hall: library, St. Raphael's and a chapel.

The Daughters of the Cross, a religious community from Shreveport, moved from St. Matthew’s and operated St. Frederick for a few years.

In the late 1960’s, at the height of the Civil Rights movement, a decision was made to close the High School division of Little Flower Academy, the African-American Catholic School in Monroe, and encourage its students to attend St. Frederick. Considering the time in which this consolidation occurred, the Franciscan sisters chose to do what was morally right in the face of some opposition. The Franciscan Sisters of Our Lady of Perpetual Help, which staffed Little Flower, agreed to serve as staff at St. Frederick High School. The transition was difficult for those students, but the result was an integrated Catholic education true to the Church’s teachings.

From its 1964 groundbreaking and dedication in 1965, St. Frederick has served the community in northeast Louisiana.

In 1979, George L. "Chip" Luffey, Jr. passed away. He was a much beloved member of the Class of 1977 at St. Frederick. The football field was named in honor and memory of "Chip".

In 1995, major renovations to the campus included the remodeling of the band room into the school library and refurbishing of the chemistry lab. Classrooms were also added to the gym and field house in 1995 and in 2019.

Built in honor of Laura Bres Breard Rinehart's parents, the Chapel of Saints Mary and Daniel was completed in the spring of 1997.

The Bud Highfill Memorial Softball Field was dedicated in 2006.

In the 2012-13 school year, the alumni organization was expanded to include alumni, family and friends. This expansion helped to broaden the support for St. Frederick. That same year, construction began to remodel the convent, built in 1974, to create the new Breard Alumni Center. The BAC upon completion will house the business offices as well as alumni relations, admissions and includes a sports training facility for coaches, referees and athletes.

In 2015, the new strength complex was completed thanks to generous donations from parents, alumni and friends of St. Frederick.